Is Jay-Z In The Illuminati?

Is Jay-Z In The Illuminati? 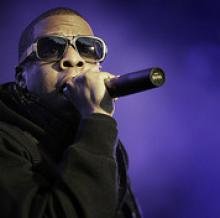 I ran across an off-handed comment today about how Jay-Z is a member of the illuminati, or maybe a Satanist, or maybe a Freemason. Like so many things, my first reaction was, "Whaaaa?"

I did some investigation and I'm prepared to agree that Jay-Z deliberately displays occult symbols. What this means is a little more difficult to determine.

Perhaps the best article on this topic can be found on Vigilant Citizen. Author VC covers Jay-Z's use of various occult symbols, and thoughtfully deconstructs the music video for "Run This Town Tonight." (I was particularly impressed by this article's lack of incoherent nonsense, which is what most conspiracy theory discussions eventually break down into.)

The article addresses the disconnect between the song's lyrics and the music video. It may be foolish to make too much out of a music video, which are typically produced as a throwaway or ancillary product meant to be flashy and cool more than illustrative of the song. Even given this, it's jarring to hear a song that's all about being super rich, which is being illustrated by a music video that's all about being a small but powerful trio staging a coup to take over a dystopic, "Escape From New York" future city.

What these two things have in common is: power. Being very wealthy gives you power. In the video, the theme of power is much more overt and physical. It consists of (e.g.) hitting the other guys with sticks. With overtones of rioting and race wars.

This is, shall we say, a common theme in rap music. Who's got power, where they got it from, how they hold onto it. About 9/10ths of rap songs can be described as "I'm a badass." In fact, both the song and the video can probably best be understood in the context of the rap industry's endless internecine wars for the control of the music business, as well as for the hearts and minds of the audience. (Even Jay-Z's Wikipedia article notes that "Jay-Z is known for quarrelling with other artists in the rap industry, the most famous feud being between him and fellow New York rapper Nas.")

Seen from this perspective, it's perhaps not surprising that Jay-Z (who is, it must be noted, already pretty much the king of the world) chooses to appropriate cultural symbols of power. The jumbled collection of symbology (including everything from Freemasonry to Aleister Crowley's Satanism) argues in favor of this interpretation. Surely Jay-Z isn't a Freemason, a Rosicrucian, a Satanist, AND a member of the Illuminati?

Jay-Z also no doubt appropriates these symbols as a form of trolling, to tweak the kind of person who freaks out at the sight of a t-shirt screen printed with the head of Bathomet. I would be inclined to dismiss it entirely, except that Jay-Z isn't just wearing items like a black hoodie printed with Crowley's mantra "Do What Thou Wilt" - he's actually selling them under his clothing line Rocawear.